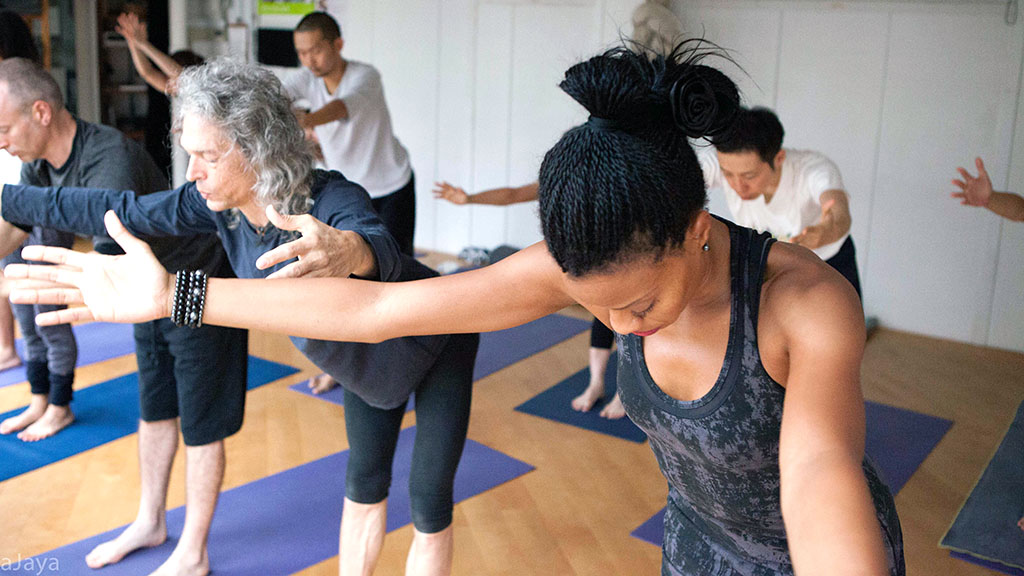 Tripsichore Vinyasa Yoga is both challenging and fun. It encourages the student to explore the furthest range of their physical potential while providing the technical approaches that ensure safety. The Tripsichore Yoga style has been developed for 30 years and, in investigating yoga, has endeavoured to reconcile the idea of making advanced physical practice enhance the ends of a spiritual quest. While Tripsichore is known for its amazing variety of unusual postures, these have been discovered through the use of orthodox yoga techniques. These techniques have been experimented with to expand the range of what can possibly be derived from sound basics. The results have shown that there is a lot more to yoga than just standard asanas.

This series of morning classes is the sort of thing Tripsichore does every day when we are at home in London. It consists of a lengthy series of Sun Salutes that include unusual inversions and back bends performed with skilful employment of Ujjayi breathing. It is a challenging warm up for the postures that follow. Tripsichore founder, Edward Clark and Tripsichore star Nikki Durrant will lead students through the Simple and Regular practice (with possible excursions into the Plus). These 2 hour classes will be devoted firstly to doing the practice and then to breaking down the sequences.

Edward Clark is known for his intriguing lectures on Yoga Philosophy and the comparisons to modern lifestyle. In these 2 evening lectures, students will be taken through a series of ideas that increase ones knowledge of the philosophy while encouraging critical thinking in the modern world.

Philosophy, religion, and yoga all purport to seek answers to big questions…what is the nature of reality? What is consciousness? Or even, what makes people happy? Contemporary discourse on yoga often sits in an intellectually uncomfortable place that tries to reconcile aspects of the philosophical with the religious.

Philosophy could be said to be the contemplation of thought or it might be something that comes about through debate, but it endeavours to present its deductions with evidence and to an extent, this distinguishes it from religion where the acceptance premises particular to any faith are less open to argument. Philosophy and religion do share with yoga many common interest regarding questions of ethics, reality, knowledge and perhaps even God, but there are some fundamental differences between their approaches to these subjects. The questions raised by these differences have considerable impact on the way yoga is practised. This lecture attempts to unpick the strands of religion and philosophy as they occur in yoga in an effort to clarify the purposes of yoga technique.

Yoga has been touted as both an art and a science. In what ways are such claims substantiated? In what ways is yoga inherently creative? What are the relationships between skill, creativity, and innate talent? What are the limits of knowledge? In what respects could yoga be said to be artistic? Does yoga practice propose theories and test them? Does it have scope for testing hypotheses that contradict its assumptions?

This lecture considers some theories of art and science to see the degree to which yoga practices are either an art or science and to determine the relevance of such claims to the future of yoga.

The technique of Ujjayi breathing has been given short shrift in much contemporary yoga practice. Even though, at this very second, somewhere on the planet, there is a yoga teacher exhorting their students to “Breathe”, little attention is paid to the subtle mechanics of this instruction and its role in manipulating prana.

One of the great things about being upside down is that it makes the action of uddiyana come more easily. Another of the delights to be found in a life upside down is that you have the opportunity to explicitly discover that you are still the same person even when you are in unaccustomed circumstances. This workshop is intended to inform on how Ujjayi breathing gets you into inverted postures and how it sustains you once you’re up.

One of the glories of physical practice is the grace of the backbend. But, the extremity of this movement is not regularly encountered in daily life. To execute these movements safely is a matter of technical exactitude which should be practised by those who find it easy to do and by those for whom is a daunting prospect. This is a workshop that will look at how to achieve extreme back bending in a safe and methodical way.

The idea behind Vinyasa is fascinating – in short, it proposes that the act of synchronising the breath with yoga movement, the mind is brought to a place of deep concentration.

In this workshop, students will learn some new and interesting variations on inverted postures and new ways to achieve back bends. You’ll find out how to be more flexible and how to do things that may look like they require considerable strength but, in accord with yogic principles, you’ll also discover that these are achieved with grace and ease.

Tripsichore contends that apart from competency and mastery, creating spectacular asanas has much to do with the energetic intention of the practitioner. Underlying the dramatic quality of inspiring asana is the exploration of the way energy flows through the body to create forms, shapes, and, ultimately, meaning. In this workshop, Edward expertly guides participants on a continued journey through innovative Sun Salutes - the glory of Tripsichore's technique, and into the deeper energetic exploration on the way to advanced asana practice. Tripsichore’s Sun Salutes are devised to explore ingenious ways of performing handstands, headstands and unusual backbends through the use of vinyasa movement and ujjayi breath. Through the cultivation of evenness of breath coupled with evenness of movement, these Sun Salutes seek to bring evenness of mind while executing challenging sequences of postures.

Edward will take students on an exploration of the dynamic potential of backbends and inversions within the framework of Tripsichore Yoga Theatre's vinyasa technique. This workshop will start with the fundamental relationships of pranayama and asana and pranayama and movement/flow. As we progress, it will focus on inversions and backbends within this framework of breath, pose, and flow. Edward fuses his keen artistic vision with a deep understanding of the essential pursuit of yoga practice. His classes are entertaining, demanding and exhilarating.

Edward Clark is the creator of Tripsichore Yoga Theatre, the London based yoga group who have delighted audiences in Europe...